KIGALI – The Senate on Tuesday decided to delay plans of dragging the leadership of Partie Sociale Imberakuri (PS Imberakuri) to court and opted to give the party two more weeks to come up with a written explanation on the accusationd that were leveled against the party’s leadership.

Senators arrived at the decision after a heated debate where the majority of lawmakers had proposed that the Senate files a lawsuit against the party.

The debate on the fate of the party came after a Senatorial standing committee on political and governance affairs chaired by Senator Joseph Karemera presented a report on the meeting it held with members of the party.

Senator Karemera said that during the meeting, Senators tried to plead and persuade Ntaganda to cooperate with them in their work but he blatantly turned a deaf ear to the lawmakers.

Senator Jose Kagabo was the first to take the floor calling on his fellow lawmakers to back the idea of taking legal action against the party after going through all necessary procedures.

“With all due respect, this man is pretending to be ignorant of the law. He knows the constitution and all the laws that can be referred to against him. The man is spreading the gospel of divisionism and looking for all possible ways on how he can be persecuted to use that ahead of the elections,” said Kagabo.

In his intervention, Sen. Chrysologue Kubwimana who was equally furious said that Ntaganda is looking for ways of creating chaos in the country.

“Without delay, the senatorial committee that followed up this issue should immediately start preparing a case against Ntaganda,” said Kubwimana.

Sen. Rwigamba Balinda described Ntaganda as “a young man who is very proud and extremely arrogant”.

“We called him here for a friendly dialogue but he totally undermined us. We tried our best to assure him that the Senate was acting in his favour but he could not understand,” said Balinda.

“If you scrutinize the language Ntaganda uses, it’s exactly the same language MDR-Parmehutu, Coalition for the Defense of the Republic (CDR) parties used to orchestrate the 1994 Genocide against the Tutsi”.

“People thought that MDR-Parmehutu and CDR were not going to be a threat at the beginning, but the more they spread their gospel, the more they got followers and they ended up massacring over a million people. This is why we should stand against these actions,” said Balinda.

As most Senators opted to first re-call the leader of PS Imberakuri to the Senate, Sen. Valens Munyabagisha differed with the proposal saying that recalling him would not make any difference.

“He will come here to insult the Senate and walk away…the Senate should instead spend that time preparing a court case against him,” said Munyabagisha.

He added that Ntaganda and his party are violating article 54 of the constitution. The article states that ‘political organizations are prohibited from basing themselves on race, ethnic group, tribe, clan, region, sex, religion or any other division which may give rise to discrimination.”

It further says that political organizations must “constantly reflect the unity of the people of Rwanda and gender equality and complementarity, whether in the recruitment of members, putting in place organs of leadership and in their operations and activities.”

Senator Jean Baptiste Bizimana backed Munyabagisha’s proposal of not recalling Ntaganda and instead called for tougher measures against him.

“I attended a meeting that summoned Ntaganda here, for those who don’t know him, he is a chaotic hardliner. We pleaded with this man, we showed him all the options of how the Senate can help him, but instead he returned insult. Trust me, calling him back here is not going to be of any use,” Bizimana proposed.

Sen. Karemera who chairs the committee handling the case of PS Imberakuri requested his colleagues to back his proposal of re-calling Ntaganda and his party.

“This time, we should come with a written explanatory note of all the accusations levelled against him. This man needs help and the Senate is ready to assist him only if he cooperates,” said Karemera.

Senator Wellers Gasamagera supported the proposal of re-calling back Ntaganda and his party to the Senate for questioning.

“We should challenge him and give him another opportunity to come here and explain himself although I am certain this issue may end up in court,” said the soft spoken Gasamagera.

François Nshunguyinka also backed the proposal of recalling the troubled politician but also said he had no hope Ntaganda would cooperate.

“This is a man who believes that sounding the alarm through the media and the international community can change anything. The last time we met here, a few minutes after the meeting, he issued a derogatory statement through BBC radio, meaning that even by the time we were meeting here, he already had a declaration,” said Nshunguyinka.

Senate President Vincent Biruta later ruled that the troubled politician be given two weeks to appear before the Senate.

Ntaganda may re-appear before the Senatorial Standing Committee on Politics and Governance affairs at the beginning of the second week of January 2010.

When contacted, Ntaganda said that he welcomes the decision taken by the Senate saying that he had also initially requested for more time so that he could prepare his defense.

“I will still stand by the words I told the Senate; whatever I say comes from my heart not my head, and I repeat that the allegations are exaggerated,” Ntaganda said on phone. 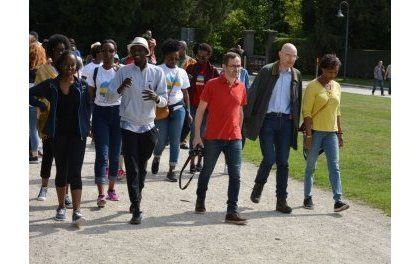