KIGALI – Political Parties and the Commission for the Fight against Genocide (CNLG) have come out strongly to condemn the President of United Democratic Forces (UDF-Inkingi) for uttering statements that negate the genocide and promote ethnic divisionism.

Victoire Ingabire Umuhoza who heads the Dutch-based FDU-Inkingi returned into the country after 16 years of self imposed exile in Europe but her comments upon arrival and after visiting the Kigali Genocide Memorial site were nothing but a revelation that she was here to play the ethnic card.

Speaking to the press shortly after touching down at Kigali International Airport and after visiting the Memorial Site at Gisozi, Ingabire said that she is in the country to relieve Rwandans ‘from fear, poverty and inefficient Gacaca’.

In an interview with The New Times, the Executive Secretary of CNLG Jean de Dieu Mucyo warned that Ingabire’s remarks which amount to genocide revisionism ‘are unacceptable’ calling upon responsible authorities to hold her answerable for her reckless statements.

“This is unacceptable; she has to change her language if she intends to continue communicating to Rwandans. We have reached a stage where such comments about the genocide should not be tolerated.”

“I even wonder why she had to go to the memorial site, it is painful for her to have said such words on top of the remains of innocent people killed during the genocide against the Tutsi and then start fronting suggestions that there was a double genocide. It is quite shocking,” Mucyo told The New Times.

Mucyo said that CNLG was aware that Ingabire and her party were trading theories in Europe in line with genocide revisionism as well as political propaganda that is based on ethnicity.

In an interview Dr. Jean Damascene Ntawukuriryayo, the Secretary General of Social Democratic Party (PSD) said that it is unfortunate that Ingabire still holds doubts that the genocide was committed against the Tutsi.

“Anybody who negates the genocide and claims to be Rwandan is not really Rwandan. Such a person does not qualify to rule this country. We all know the genocide happened and it had been planned earlier to have all Tutsis killed,” Ntawukuriryayo who also doubles as the Deputy Speaker of the Lower Chamber of Deputies said.

He noted that Ingabire’s remarks were irresponsible and are a sign that she is out of touch with what is happening in Rwanda.

He challenged her to bring forward cases of her people who were killed and those who killed them and see whether justice will not be delivered.

“You cannot say such things especially if you know where the country is today in development and where you left it 16 years ago. I have been a Minister and MP in this Government, I have not seen any Rwandan living in fear,” Ntawukuriryayo noted.

The President of Ideal Democratic Party (PDI), Sheikh Musa Fazil Harerimana said that Rwandans have chosen a government of unity and reconciliation that focuses on development and cannot be confused anymore by politics of divisionism.

“Rwandans know the pain caused by politics of ethnic divisionism and they will not allow this to happen again. What they want today is someone who comes with development plans and not one who will divide them.”

“Well, if she can’t realize the achievements of Gacaca, what solution has she brought forward? The world asked us what Gacaca was and we showed them how we were going to do it. Later the whole world appreciated the job done by Gacaca, who is she to downplay it?” Harerimana pondered.

He added that for the last 15 years, Rwandans have experienced good governance and development and not just words, and they will not be confused by those who want to hold them to the past.

“There is no doubt that what happened in Rwanda was genocide against the Tutsi and if she knows the definition of genocide, it affects a particular group of people or race and not two ethnicgroups can be targeted,” Harerimana said

Protais Mitali, the President of the Liberal Party (PL) was equally shocked by her remarks but added that it did not come as a surprise since she has been saying the same in Europe.

“She is known for this kind of talk, we all know she is here to play the ethnic card but she should know that Rwandans will no longer accept sectarian politics, today we look at each other as Rwandans.”

“She doesn’t know where we are today—she is still stuck in the politics before 1994 and we cannot allow such people to take us back. We will fight and defeat them on all fronts,” Mitali

Mitali noted that Ingabire was involved in European campaigns which suggested that there was no genocide but after failing to convince the world she developed the double genocide theory.

“She could not have participated in the genocide, but standing on top of the remains of those who were killed and utter such statements almost amounts to committing genocide. It is the worst way to mock the dead,” Mitali remarked.

Ingabire is set to embark on plans to register her party ahead of the August Presidential elections. She has expressed her intentions to stand as a candidate. 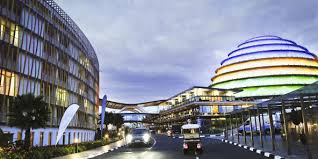