ed from outside to finance this $240million complex. The IMF says government made the right decisions

In last year’s budget, government gave unspecified loans to struggling and constantly loss-making Rwandair to purchase planes. The 2 Boeing aircrafts – which are the first to be owned by the national carrier, will be operational by the end of next year.

During the same period, disagreements also arose between government and the foreign investors in the Convention Complex – prompting them to withdraw. Parliament heard from the Finance Ministry in May that the foreigners jumped out after government demanded a share of the project.

Despite the construction halting for several months till mid last year, the $240million Kigali International Convention Complex is headed for completion on time in two years – with just government and the Rwanda Investment Group (RIG), as joint owners.

Now the IMF says the loans – which government borrowed externally to give to Rwandair and the Convention, are good investments. Government considers the two as “strategic investment projects”.

“The authorities have conducted feasibility studies, with assistance from international consultants, which show these projects are expected to have rates of return above financing costs,” says the Fund in a policy statement released Thursday.

“The borrowing takes into account the limited availability of concessional financing, a shallow domestic capital market, and the need to avoid crowding out the private sector.”

As Rwanda stops getting IMF grants with effect from this financial year, in favour of technical support to enable government to get low-interest loans, the Fund says “Rwanda continues to have a moderate risk of debt distress.”

“The baseline macroeconomic scenario indicates that Rwanda’s debt dynamics would be sustainable even if the assumed amount of non-concessional external borrowing is contracted,” says the Fund.

However, the correspondences published in the policy statement show that government and the IMF do not agree on how much the economy has been growing or is expected to expand.

After growing by 11.2 percent in 2008, the IMF estimated a slowdown in growth to 4 percent in 2009, compared with the government’s estimate of 6 percent growth. The economy actually widened by 4.1 percent.

The IMF defends its estimates as “based on a more pronounced slowdown in wholesale and retail trade, construction, real estate, and manufacturing sectors that are particularly vulnerable to the global slowdown and tightened domestic liquidity conditions”.

For 2010-11, Finance Minister John Rwangombwa expects the economy to grow at 7-8 percent – which the IMF says is unthinkable.

The growth rate may increase to 5.4 percent this year and 5.9 percent in 2011, compared with 4.1 percent last year, the Washington-based fund said in the Thursday report.

The Rwanda Investment Group (RIG) and National Social Security Fund (NSSF) will have 51 percent stake of the Kigali International Convention Complex – with the remaining 49 percent being for government.

Billed as the biggest in the region, the Complex will have a capacity of some 2600 delegates. It will also have dozens of businesses complexes and shopping malls. 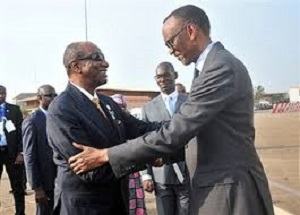