NYARUGENGE – President Paul Kagame, yesterday, commended the Kigali business community, for their hard work and determination to form cooperatives which have significantly contributed to the country’s economic development.
Kagame made the remarks during his visit to Quartier Commerciale – the commercial hub located in downtown Kigali.

The President said that the purpose of his visit was to thank the business community for the great work, which has resulted in the improvement of living standards.

Kagame said that the government is playing its part by improving infrastructure, increasing access to water and supporting the construction of commercial buildings to facilitate growth.

The President challenged Rwandans to strive harder and ensure that the common goal of the country’s development is attained.

Regarding peace and security, President Kagame noted that every citizen must be vigilant. He, however, assured the thousands of residents who had gathered to meet him that those in charge of security were working hard to make sure all Rwandans are safe.

After interacting with the community and responding to their questions, Kagame toured the Kigali City Towers under construction.

The Engineer in charge of the project, Wang Lei, explained to the President that the building will house a movie theatre, a supermarket on level one and two, a huge commercial centre and a parking yard that will accommodate over 300 cars at a time.

“Do whatever it takes to finish the work on time,” Kagame said. The building is scheduled to open for business in three months’ time.

According to Lei, the project which cost $9.1 million will be a state-of-the-art business facility in Kigali city. 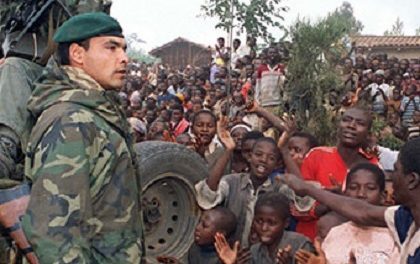