Kigali: The National Electoral Commission has cleared four candidates to contest in the August 09 poll – amid accusations that opposition politicians were barred from running in the race, RNA reports.

This will be the second presidential elections since the 1994 Genocide against the Tutsi. The first was held in 2003 and was won handily by Paul Kagame and his ruling Rwanda Patriotic Front (RPF).

In this year’s elections, the RPF has returned incumbent Kagame as its flag bearer and according to the country’s constitution he is expected to be running for his final term.  NEC has accepted his application for the race.

The other candidates include Senator Prosper Higiro, representing the Liberal Party (PL), Dr Jean Damascene Ntawakuriryayo of the Social Democratic Party (PSD) party, and the only female contestant Alvera Mukabaramba – in for the Party for Prosperity and Concord (PPC) party.

This is the second time Ms Mukabaramba is contesting the presidency. She initially ran in the first post-genocide presidential elections in 2003, only to withdraw shortly before polling day and throwing her support behind the RPF and Paul Kagame.

The elderly opposition politician Jean Nepomucene Nayinzira, who appeared in the 2003 poll, indicated to RNA in May that he would contest but it is not clear why he did not submit an application.

The Commission says the four applications are all they received and each one of them met the requirements in the law to contest the country’s presidency. Victoire [Umuhoza] Ingabire and her party UDF-Ikingi, who have made headlines in recent months, did not submit applications to run for the presidency.

In a recent interview with RNA, Ms Ingabire said she had decided against running as an independent candidate after her party failed to get registered in time to submit her, or anyone else, as its candidate.

The candidates have 20 days to campaign beginning July 20. The Commission’s Executive Secretary Charles Munyaneza says the two weeks between now and when the campaigns officially begin are set aside for any complaints or issues that may arise and require the Commission to address and rectify accordingly.

The Commission expects the number of eligible voters in this year’s election to be 5.2 million Rwandans, which is half of the estimated country’s population. 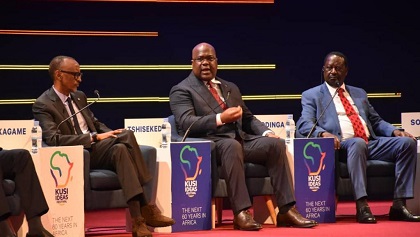