PARLIAMENT – All governors and mayors, yesterday, at the Parliamentary Buildings in Kimihurura, signed their performance contracts with President Paul Kagame in what has now become an annual event aimed at accelerating development programmes across the country.

Shortly before signing the 2010/2011 performance contracts, also known as Imihigo, each of the local leaders read out their province or district’s achievements, over the past one year, as well as the planned activities for the next fiscal year.

Nyamasheke District of the Southern Province, was named the best performing district for the past one year, toppling Nyamagabe District of the same province, from the top slot, it had occupied for the last two years. Nyamasheke was followed by Gicumbi, Nyamagabe, Bugesera and Kicukiro districts, respectively.

Each of the five top performers was rewarded with a laptop and a certificate of appreciation. On top of the prizes, Nyamasheke was also awarded a trophy as the best performing district for the year 2009/2010.

In his speech, President Kagame acknowledged the achievements realized so far as a result of Performance Contracts and thanked the districts that performed highly.

He paid tribute to Nyamasheke for becoming the best performer, and cited Bugesera’s achievements as an example of what can be realized, if the right policies were implemented with determination.

The President made special recognition of Nyamagabe district which he said has continuously been featuring among the best performers.

Kagame, however, had no kind words for the worst performing districts, and expressed concern about the performance of the leaders from the Eastern Province, where three of the five worst districts are located.

Citing Rwamagana as an example, the President lashed out at leaders who choose to reside outside their communities, and instead opt to live in Kigali. He wondered how such leaders can deliver development to communities whose problems they hardly understand, since they do not interact with the people.

He added that such leaders cannot concentrate on their work as they are always rushing to return to Kigali before sunset.

President Kagame reminded them that a good leader is one who is close to the people, listens to them and, together they come up with the best solutions to their problems. He further said the he hoped such positive criticism will result in better performance.

Kagame observed that there are many developmental activities that have been achieved as a result of the performance contracts and that there is a significant change to the welfare of the people.

He reminded the local leaders that performance contracts are in line with the government’s policies of good governance which have uniformly fostered national development.

The President said that when citizens take part in developmental activities, there is a lot that is achieved since the success registered is not only a result of funding but also a result of the mindset, collaborations and good planning of leaders and the citizens.

The President noted that performance contracts encourage transparency since the leaders are required to showcase how they have served the people. He hailed the healthy competition that has, of late, developed among the local leaders, with each vying for the top spot.

The President urged Rwandans to seize the opportunities offered by regional and international trading blocs, and called for a stronger and more competitive local private sector.

Kagame called upon the Rwandan people to build on what they have already achieved and garner more success. He went on to challenge the local leaders to raise the bar to achieve what would, otherwise, be deemed impossible. 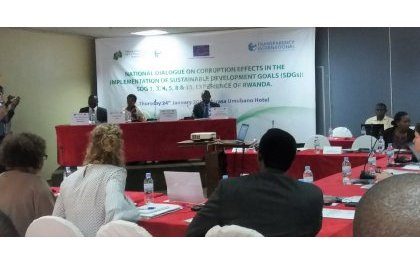