President Kagame with heads of the Burundian, Belgian and Congolese parliaments after speaking at the opening ceremony of 3rd conference of Speakers of CEPGL member states, yesterday.

KIGALI – President Paul Kagame, yesterday, underscored the importance of the Economic Community for the Great Lakes Region (CEPGL), as a platform which member states can effectively use to address challenges faced by the citizens of the member states.

The President made the remarks while opening the two-day meeting of Speakers of Parliament and Senate presidents from CEPGL.

The bloc brings together Rwanda, the Democratic Republic of Congo (DRC) and Burundi.

The Head of State noted that CEPGL, which was reinstated in 2008, and its institutions, will largely benefit the people of the region through development efforts, peace and security and improving the well being of the people.

“There is no denying that our region has gone through difficult times in the past, and as a result, ceased to function optimally,” Kagame said

He said that in recent years there have been serious and concerted efforts by the member states to revive CEPGL “precisely” because of the significance of the regional grouping in promoting the social welfare of the people and sustainable development.

President Kagame noted that governments in the region have progressed well in mounting efforts to ensure the return of peace and stability and that it is important for the parliaments of member states to join hands to support the cause.

“Representative parliaments can take strategic positions to consolidate peace, security and economic development especially where there vision and outlook go beyond their national confines,” he said.

He challenged the parliamentarians to do more to advance the socio-economic development of the people, because, as a branch of the state, parliament has a crucial role in creating conditions for lasting peace, using their legislative powers.

President Kagame noted that, as representatives of the people, parliamentarians should mobilise the people to recognise the need to resolve both intra state conflicts and those that stretch beyond national borders.

“Parliaments are also uniquely placed to promote diplomacy and close cooperation between themselves, to harmonise laws that govern the use of our resources such as infrastructure, gas and electricity to ensure the smooth running of our institutions,” he said.

The President further noted that parliaments are responsible for strengthening institutions in their respective countries that have been put there to promote unity, reconciliation and peace building.

He cited Rwanda where Parliamentarians have played a positive role through mobilising people to participate in Gacaca Courts and Unity and reconciliation programmes.

Again underscoring the importance of parliaments, President Kagame said that the laws they pass, such as anti-corruption and accountability laws are all important in protecting the interests and well being of the people.

Most importantly, President Kagame noted that the socio-economic development role played by the parliamentarians and CEPGL are of great importance, as the member countries are striving to improve the well being of the people.

“That’s why in Rwanda the economic empowerment of our people will feature prominently in the partnerships that we enter and protocols that we sign,” Kagame said.

“It is very clear that over the past few years, citizens of our countries have began to benefit from improved peace and security,” he added.

The president of the Senate Dr. Vincent Biruta commended the Belgian Parliament, for taking the initiative to convene meetings between the 3 parliaments, in a bid to promote peace.

He noted that “positive and commendable” development has been registered following the meetings which took place in Belgium at first and later Bujumbura, DRC and now Kigali. 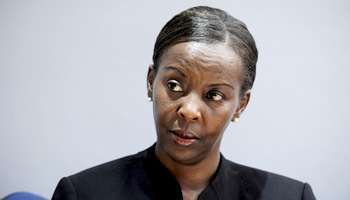