Rwanda : BUDGET: What it promises

The Minister of Finance and Economic Planning. John Rwangombwa, arrives at the parliament to present the Budget (Photo.T.Kisambira)

KIGALI – Rwanda’s fiscal expenditure is projected to rise by 7.6 percent in the next fiscal year, Finance Minister, John Rwangobwa, said as he unveiled the 2011/12 budget, which also entails slashing fuel levies to contain inflationary pressures and cushion the economy against external shocks amidst volatile global oil and food markets.

While presenting the budget to Parliament, Rwangombwa highlighted that Rwanda’s ability to cope with the spill-over effects of the global economic and financial situation, which looks uncertain with several macroeconomic risks will remain the key objectives of the country’s economic policy in the coming fiscal year.

“This year (2011) is already proving to be a difficult year for our economy,” he said in his second budget reading as the Minister of Finance and Economic Planning.

Rwangombwa envisages that the turbulent global economic situation, which is characterised by world fuel and food price increases, is likely to lead to higher inflation, threatening the country’s food security and macroeconomic stability.

Rwanda’s inflation reached 5 percent at the end of April 2011 compared to 0.2 percent at end December 2010.

In a highly anticipated move the Finance Minister announced that the government will slash fuel taxes by Rwf 100 per litre for both petrol and gasoil to contain inflationary pressures.

While the treasury is expected to lose Rwf 14.1 billion as result of the fuel tax reduction, the budget proposed tighter revenue measures including introducing electronic transaction devices to increase efficiency of Value Added Tax (VAT) collections.

The proposal targets retailers who do not issue receipts to their customers for purchases made and would boost VAT collections by Rwf4.2 billion in the fiscal year 2011/2012, thus bridging the shortfall.

The proposed measures also include the introduction of a gaming special tax of 13 percent and a withholding tax of 15 percent.

“On the basis of activities performed in 2010, we expect collections in 2011/2012 of Rwf 186.3 million and Rwf 859.9 million in gaming special tax and withholding tax respectively,” Rwangombwa said.

The plan is however subject to the gaming law due to be passed by Parliament.

These yields from the increase in VAT efficiency and the introduction of the gaming taxes will reduce the fuel tax adjustment loss from Rwf14.2 billion to about Rwf9 billion, the Minister said.

Other proposals include implementation of the EAC Common External Tariffs (CET), where rice will attract CET of 30 percent, tractors 0 percent, wheat grain 0 percent, wheat flour 35 percent, construction materials for investors with projects of at least US$1.8 million 5 percent, and aluminium conductors and cables 10 percent.

The overall cash deficit is projected to decline sharply from Rwf 155.1 billion to about Rwf 96.8 billion.

With an allocation of Rwf170.5 billion, the education sector will take the lion’s share in the financial year 2011/12, up from Rwf155.7 billion in 2010/11 to largely cater for the continued implementation of the 9-Year Basic Education programme.

A big chunk of the money is also expected to go towards scaling-up of the Technical and Vocational Training institutions (TVET), as the government focuses on prioritising vocational training and skills to develop a rich human resource needed for development.

The Health Sector comes second with Rwf131.9 billion as government aims at fast tracking the Rwanda Bio-Medical Centre (RBC) to improve service delivery of health care, as well as the implementation the new “Mutuelle de Santé” policy to promote health insurance and increase access to health care for the population.

With the theme of the 2011/2012 budget being “Ensuring Food Security and Price Stability whilst Maintaining Sustainable Growth” the agriculture sector was allocated Rwf 67.1 billion.

Following the completion of the optic fibre project in the financial year 2010/11, the government will reduce budget allocation to Information and Communication Sector to Rwf t25.7 billion compared to Rwf 29.4 billion in 2010/11.

Trade and industry was allocated Rwf 35.2 billion, down from Rwf 55.5 billion in 2010/11. The shortfall was caused by the shift of RDB from the Ministry of Trade and Industry.

The Social Protection and Governance sector was allocated Rwf 48.3 billion compared to Rwf40.6 billion in 2010/11 financial year, an increase of about 26 percent.

“The Government’s budget and economic policy for fiscal year 2011/2012 is built on the EDPRS foundations and a prudent macro- economic and fiscal framework,” the Minister said. 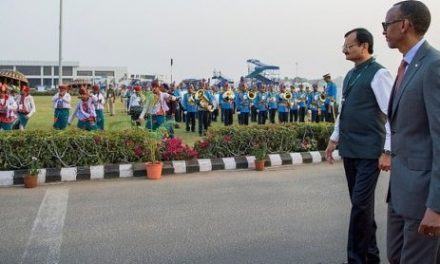