The importance of the official visit of

The importance of the official trip which the Rwandan President gets ready to perform in France is not blindingly obvious. This visit is more worth than a simple chase of the normalization of relations between both countries. This visit goes beyond the commercial contracts. The official visit of the president Kagame in France, at the invitation of the president Sarkozy, is an obvious gesture of the sovereignty of Rwanda. It means:  » Our two countries speak of equal in
equal « . And this fact pains the ordinary mentalities of Françafrique.

Note that these relations had been interrupted during three years, on the initiative of Rwanda, further to mandates, legally and politically disastrous, thrown by a French judge against Rwandan personalities of high rank. After Kouchner and Guéant, the president Sarkozy went himself to Rwanda to confess, in the form of excuses, « errors » and « blindly » which led France to get involved in the process of the genocide of 1994.

The purposes of reconciliation of Sarkozy in Kigali had raised the indignation of the servicemen and the French politicians who were in office during aforementioned genocide. Because it is definitely them who represented the « blindly » of France before, hanging and after  the genocide of Batutsi of Rwanda.

These same men, generals and ancient ministers, are sickened  literally by the idea of the picture of the president Kagame today accepting the military honours of the « Garde Républicaine » before being received by the president Sarkozy on the flight of steps of the presidential Palace.

Actual minister of Foreign Affairs of Sarkozy, Mr Alain Juppé, will be away. He didn’t hesitate to demonstrate its hostility to the visit of Paul Kagame by these virile purposes, but ô how babyish!:  » I cannot shake the hand of this man « . The protocol and the usage, in France, who want minister of Foreign Affairs to be beside the President to receive a foreign presidential deputation were swept just like that of contempt by the Minister of State, Alain Juppé. Having learnt the insulting words of Juppé, the President of Rwanda had this replica, courtesy of France and its President, but scathing to the Minister: « the policy of France is not just to Alain Juppe. »

I do not know the state of mental health of the general Tauzin, but its purposes call two conclusions « minimum « :

1. The invitation of the French President to his Rwandan counterpart « mucks up  » France and all its army, asserts the general Tauzin.

2.  » 200 000 deaths  » at the farthest in the head of the general Tauzin: is it pure ideological revisionism or did it perform a real counting of bodies, since he was on place?

Are the clumsy and violent recriminations against the diplomatic action of the president of the French Republic by a Minister of State, minister of  Foreign Affairs, a simple cacophony or a cooperation not confessed with his boss?

Whatever the questions raised by the statements of some prominent French colonialists, the line of Paul Kagame can be altered by gossip, even hate and contempt. His visit in France is part of its action, in interest of its country.

To the question of « Jeune Afrique »,  » Who is the man Kagame? « , the Senegalese writer Boubacar Diop said: « He has character, and its leading role was decisive after genocide. If certain hate him in so irrational way, it is because they expect from an Africain head of state that he is hedonist, corrupt and especially tame. Kagame
corresponds in no way to this picture.  » (In 10.06.2011, interview).

Elsewhere, regarding the Ivory Coast, Kagame himself declares:  » The fact that, fifty years after independence, destiny of the people of the Ivory Coast, but also its economy, its currency, its political life, are still controlled by the ancient colonial potency poses problem. The more I look at [the Ivory Coast], and the more I see the
shade of a foreign movie director.  » (« Jeune Afrique », 15.05.2011, interview).

Here is the man who’s hated and feared by Alain Juppé, the general and their friends. Kagame could be a good example of leadership in Africa, an example of autonomy. Paul Kagame will fulfil an official trip in  the respect which demands strict reciprocity.

This text’s sligthly corrected on September 8, 2011 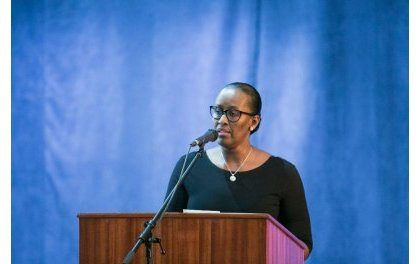