First Lady, Jeannette Kagame waves to School Children as she arrives at Nyamirambo Stadium for the awarding ceremony along with the state Minister for primary and secondary education, and KCC Executive Secretary, yesterday. (Photo J. Mbanda)

While addressing hundreds that gathered for the 6th annual awarding ceremony, Mrs. Kagame said that this year, 470 girls from across the country received awards for academic excellence in last year’s national exams. Today 189 girls were rewarded from 7 districts.

65 foster parents also referred to as “guardian angels” (Malayika Mulinzi) will be rewarded countrywide for treating their adopted children just like their own. Today, 14 foster parents were rewarded, also from 7 districts.

“We started the girls rewarding ceremony with three major goals which include, ensuring that every girl enrolls in school, completes all the levels and excels highly as an inspiration to others,” Mrs. Kagame said.

“I must commend that we have successfully achieved the first step not only for girls, but for boys as well, however, the second and third steps are still a challenge because not all who enroll in school, complete primary and secondary levels; others still drop out of school.”

The First Lady, therefore, wondered why and where they go after dropping out of school citing that this is unfortunate since these are the mothers of tomorrow who will be responsible for the country’s future generations.

“We must do whatever it takes to ensure that these children enjoy their right to education and in this regard we must scale up interventions at all levels to obtain this goal.

This is why we have such rewarding initiatives,” she said.
As she emphasized the fact that girls’ performance is still wanting, Mrs Kagame stressed that during its inception, the foundation aimed at awarding 1 girl per sector at primary level, 1 at O’ level per district and 3 students per province at A’ level.

“Unfortunately some sectors and districts still lack representatives and we must ensure that next year every district is represented with best performing girls here,” she added.

The First Lady also noted that city children perform better than their counterparts in the villages, calling for a need to improve the quality of primary education in the rural areas.
“It is the major foundation to a child’s academic excellence even as they grow.”

She urged children to aim higher and not be intimidated in any way adding that everyone has the potential to excel as long as they understand the importance of reading hard as well as having the will to reap from the seeds of knowledge.

The First Lady thanked the exemplary parents and advised them to form associations where they can discuss and share ideas on key issues such as protecting their children from vices like sexual and gender based violence.

Five girls, who are set to join university were awarded with laptops while the rest each walked away with Rwf20, 000, textbooks, bags, sets, calculators and books.

The UN Resident Coordinator, Aurelien Agbenonci thanked the First Lady for this initiative that has impacted lives of many in Rwanda adding that Africa needs such initiatives.
He emphasized that advocating for the education of the girl child strongly impacts on a brighter future for the nation adding that the achievement of many of these girls will sell as inspiration to others.

Since the inception of the rewarding girls program in 2005, Imbuto Foundation has rewarded over 2000 girls. Since 2007, 155 guardian angels have been rewarded countrywide. 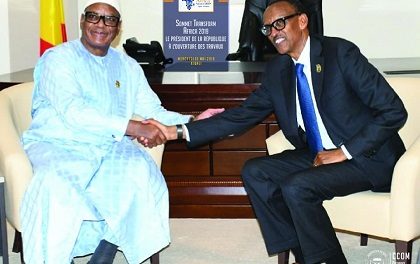