By Wangui Kanina
NAIROBI (Reuters) – Burundi is east Africa’s most corrupt nation according to an anti-graft watchdog, while Kenya, which usually tops Transparency International’s (TI) annual list of graft-prone countries in the region, was third.

Burundi and neighbouring Rwanda were included in the East African Bribery Index survey 2010, commissioned by TI-Kenya for the first time this year.

Burundi had a bribery rate of 36.7 percent, Uganda 33 percent, and Kenya registered an improvement with a 31.9 percent prevalence of bribery this year from 45 percent in 2009.

Tanzania was fourth with 28.6 percent rate while Rwanda had a bribery rate of just 6.6 percent.

« The revenue authority in Burundi is the most corrupt institution in the region, with a prevalence of 90.2 percent, dislodging the Kenya Police which topped ranks in 2009, » said Samuel Kimeu, the group’s executive director.

Kenya’s police force, which has dominated a separate Kenyan bribery index since it was first published in 2002, was third after Burundi’s police. None of Rwanda’s institutions were ranked in the index of 116 organisations in the region.

Kenyans go to the polls on Aug 4 to vote on a new constitution which analysts say will have stronger accountability safeguards and will serve as a gateway for much needed reforms aimed at curbing corruption in the public sector.

BRIBERY NEGLIGIBLE IN RWANDA
Most east African residents expect to be asked for bribes, known as « kitu kidogo » — a little something — to get most services, and so they rarely report such incidents.

The World Bank says higher costs for businesses due to corruption, as well as poor infrastructure or insecurity, are « invisible costs » that can hit competitively with other regions in the world.

The index looks at five indicators: likelihood of encountering bribery, the prevalence, the impact of bribery, the average bribe size and the total value of bribes paid to an institution out of the total paid to all organisations.

« The (survey) clearly shows that apart from Rwanda where incidents of bribery were found to be negligible, corruption is still an impediment to responsive public service delivery in the region, » said Kimeu.

East African Community (EAC) members Burundi, Kenya, Rwanda, Tanzania and Uganda have a combined gross domestic product of around $75 billion (49 billion pounds) and a population of close to 127 million. It has a customs union, and a common market took effect this month.

Rwanda established an ombudsman’s office in 2004 to monitor transparency and compliance to laws in all government sectors.

The survey was compiled from responses from 10,505 people in the EAC member countries in January-March 2010.

Kimeu said although some countries had instituted reforms in their legislation dealing with graft, there was no political will to implement the reforms. 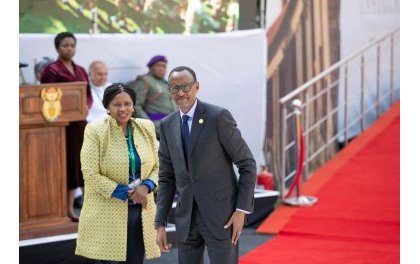