The best is yet to come – Kagame

NYARUGURU – Rwanda Patriotic Front (RPF), Presidential Candidate, Paul Kagame, has said that his party still has a lot to offer to Rwandans beyond what it has delivered in the past seven years.

Kagame, made the remarks while addressing a mammoth gathering of about 80,000 RPF supporters, who had turned up for the RPF campaign rally in Nyaruguru District, South Province.

The candidate urged the residents of Nyaruguru District to re-elect him, if they wanted to continue reaping the fruits of progress and prosperity.

Bordering Burundi, Nyaruguru District is one of the many parts of the country that have visibly benefited from Kagame’s leadership. The district has experienced remarkable economic growth, infrastructural development and the social welfare of the people has greatly improved among other developments.

At the rally, famous local artists, Kitoko, Tuyisinge, Eric Senderi, Rafiki, Tom Close, Dr. Claude and Alpha fired-up the excited supporters as they waited for the candidate to arrive. And when he arrived, the excited crowd welcomed him with thunderous cheers.

In his address, Kagame expressed his gratitude for the large turnout, adding that he was visiting to celebrate together with Nyaruguru residents, the achievements of their district.

The candidate went on to say that better things are yet to come, and that the development the district has recorded, is just the beginning of what awaits them.

Kagame told the residents that together, they can continue building a great and firm country that would make every Rwandan proud.

Vestine Niyonsaba, a widow of the 1994 Genocide against the Tutsi gave her testimony about how she regained hope in life after the death of her husband.

“I met a group of RPF members talking about government policies. I approached them and they oriented me. I acquired a loan from the bank, built a house, paid school fees for my children and bought a cow,” Niyonsaba said.
She added that since then, she has been involved with a number of projects and that she is now back in school pursuing a bachelor’s degree.

“Women have realised that, with Kagame, everything is possible, I pray to God that he wins the elections,” she said. 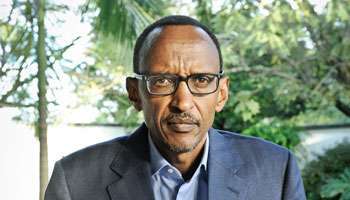