KIGALI – It was fun, feasting and merrymaking yesterday at Muhazi Beach Resort, as the Eastern Province celebrated the August Presidential elections victory of the RPF and its candidate Paul Kagame.

Not even the rain could stop the determined residents from dancing and singing. RPF Vice Chairman, Christophe Bazivamo, represented Party chairman, Paul Kagame, at the event that was attended by the RPF top brass and senior government officials.

In a message delivered on behalf of President Kagame,  Bazivamo extended thanks to the residents of the Eastern Province for overwhelmingly turning up to support RPF during the campaigns and on voting day.

“The Chairman sends his heartfelt greetings and appreciation,” Bazivamo said. “He wanted and planned to be with you today but could not due to some urgent government duty.”

“He (Kagame) appreciates the fact that you all arranged to meet here, to celebrate with the candidate you campaigned and voted for overwhelmingly,” Bazivamo told the excited crowd.

He urged the local leaders, mobilisers at the grassroots level as well as opinion leaders to convert the efforts demonstrated during the campaigns into real actions that will steer the country’s development forward in the next 7 years.

Bazivamo pointed out that by voting Kagame, they had chosen development, adding that they should support him in multiplying the progress the country has registered over the last seven years.

Bazivamo reminded the residents to keep promoting unity and shun politicians who want to make the country regress to the dark days of ethnicity.

He noted that Rwandans had managed to weather the smear campaign against the country during the elections, adding that the Rwandan people should ignore its detractors and pessimists and instead focus on developing their country.

The Governor of the Eastern Province, Dr. Ephraim Kabaija commended the residents of the province for registering the highest voter turnout of 99.8 per cent.

President Kagame registered the highest number of votes in the Eastern Province with 93.9% of the total votes cast.
Local musicians including Eric Senderi, Sgt Robert, Mako Nikoshwa, and Makanyaga band entertained the crowd.

Government officials, army and police, legislators and opinion leaders alike joined the crowds as the danced Igishakamba, a popular traditional dance in the Eastern Province.

The party was organised by residents who contributed bulls, drinks and other foodstuffs with the help of the province. 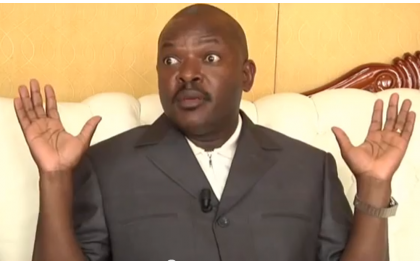