The Embassy of Japan Friday evening hosted an official reception to mark the 78th birthday of Emperor Akihito.

Akihito, the eldest son and the fifth child of Emperor Hirohito, was born on Dec 23, 1933. The Emperor’s birthday is a national holiday in Japan.

Speaking at the event, the Japanese Ambassador, Kunio Hatanaka, said: “His majesty’s birthday falls on 23rd December but since this date coincides with Christmas holidays for many of you, we have decided to celebrate it in advance.”

He hailed the government of Rwanda for being among the first countries to extend heartfelt condolences to Japan after the country was hit by a devastating tsunami in March.

The tsunami, which was triggered by an earthquake, left many buildings destroyed, thousands of people dead or missing, and many desperate survivors with no food or shelter.

“Since March this year, Japan has been exerting all efforts to restore and reconstruct the disaster affected areas and damaged supply chains are close to full restoration,” he said.

Ambassador Jacqueline Mukangira, the Director of Bilateral and Multilateral Cooperation who spoke on behalf of the Minister of Foreign Affairs, said; “This occasion is significant since it provides an opportunity for us to reflect on the status of bilateral relations between our two countries”.

She noted that relations between Rwanda and Japan have remained strong and vibrant despite the very considerable geographical distance that separates the two countries.

The ceremony brought together government officials, members of the diplomatic and the business community, among others.

On the occasion of the Emperor’s birthday, a public ceremony takes place at the Imperial Palace, a place that is normally off limits to the public.

The palace gates are opened and the Emperor, accompanied by members of the Imperial Family, appears on a palace balcony to acknowledge the greetings of crowds of festive well-wishers. 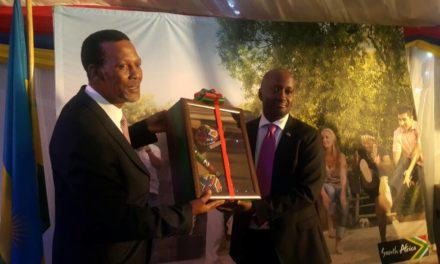