NYAMAGABE – RPF’s Presidential candidate, Paul Kagame, yesterday campaogned in Nyamagabe District where he assured more than 90,000 party supporters that Rwandans know what is best for them and are determined to achieve even higher levels of development.

In his speech, the incumbent commended Nyamagabe District for its exemplary performance in achieving its developmental targets, after it was ranked among the top three performing districts in the country.

The candidate told the crowd that such performance is proof that Nyamagabe residents are not only performers, but also know how to make the right choices.

He went on to urge the residents to vote RPF, adding that by doing so, they would be choosing a future with greater achievements.

Kagame reminded the residents that Nyamagabe District plays a critical role in the general development of the country and that they should keep up the progress that the district is registering.

The candidate called upon the residents to always work in the interest of the country and strive to build a nation that would show the World that Rwandans know what, and how to achieve, what they want.

Kagame said that he was in Nyamagabe to join the residents in celebrating past achievements, adding that, if voted back into office, a lot more will be done in the next seven years.

During the rally, Marie-Vianney Karigirwa gave a moving testimony about how she lived a miserable life before the RPF led government introduced the One-Cow-per-Household programme.

“I could not even afford a Rwf 100 piece of soap. Life seemed so difficult until I benefited from the One Cow programme. I sold milk and I have been able to accumulated savings,” she said.

“Savings continued going up and at one point I got a loan of Rwf500,000 to start a poultry business. I have since managed to construct a house, bought land and soon I will be buying my first vehicle to help in my businesses”.

Karigirwa, went on to urge her fellow residents to vote for the RPF candidate, saying that every Rwandan should be proud to have a leader like Kagame. 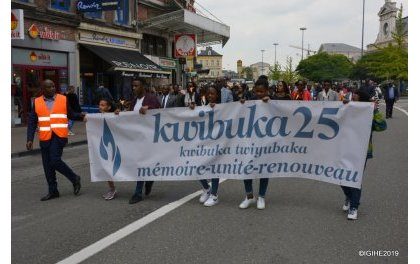