Rwanda’s ambassador to the United States said his country has asked the U.S. government to help in the investigation of money transfer by Paul Rusesabagina to rebels in Rwanda.

Rwanda’s top prosecutor said Wednesday that Mr. Rusesabagina and jailed opposition Victoire Ingabire have been providng financial support to the Democratic Forces for the Liberation of Rwanda (FDLR) rebels.

Rwandan President Paul Kagame
Rusesabagina denied the allegations to VOA Thursday, saying they were part of an attempt by President Paul Kagame’s government to smear his reputation.
Ambassador James Kimonyo said the Rwandan chief prosecutor has collected ample evidence from governments around the world showing how Mr. Rusesabagina and jailed opposition leader Ingabire have been providing financial support to the FDLR rebels.
“One of the key evidence that has been presented are the documentations from the bank, especially the money sent through the American company, the Western Union, and he (the prosecutor) is in possession of those documents and what he is asking is for anybody, including the accused to prove him wrong about these evidences,” he said.
Rusesabagina told VOA Thursday that the last time he sent money to Rwanda was in 2002, to his family.

Jailed opposition leader Victoire Ingabire
“My younger brother had a brain tumor then we had to hire a medical doctoer from South Africa to Kigali. At that time I sent about $1,000 if not less to help,” Rusesabagina said.
Rusesabagina said he believes in reconciliation through words and not through guns and that the Rwandan government accusations against him were all part of an attempt to smear his reputation.
Ambassador Kimonyo said the evidence shows that Rusesabagina did sent money to the FDLR rebels.
“We are not saying that he should not send money to any relative anywhere in the world, and we are not working under the assumption that he never sent any money to any relative. What we are saying in this specific case is that he did send money to the commanders of FDLR who have been apprehended… and the evidence shows that they have received from Mr.  Rusesabagina. He sent the money from Texas, San Antonio,” Kimonyo said.
The ambassador said the Rwandan government has asked American law enforcement authorities to investigate the matter and that the truth will come out.
“We have formally communicated this and the gentleman (Rusesabagina) is being investigated. The reason why we want this country to cooperate on this matter is that this case has and international dimension, terrorism,” Kimonyo said.
The ambassador said Rusesabagina has been soliciting money from Americans through fundraising activities at universities and other institutions.
“And I think it will not be okay for taxpayers’ money to go to support terrorism in Congo and the whole region,” Ambassador Kimonyo said.
The ambassador denied that President Paul Kagame’s government has been using the terrorism and corruption labels to silence critics.
“President Kagame has enforcing accountability which I think maybe Africans are not used to that. Everybody who has been working with the government, as long as you have issues with the government whether you have been asked to account for what you have done, then you go and say the government is after me and they want character assassination and so forth. And you use that scapegoat to cover your own doings,” Ambassador Kimonyo said.
http://www.voanews.com/english/news/africa/Butty-Rwanda-U-S-Ambassador-Kimonyo-29october10-106282544.html
Posté par rwandaises.com 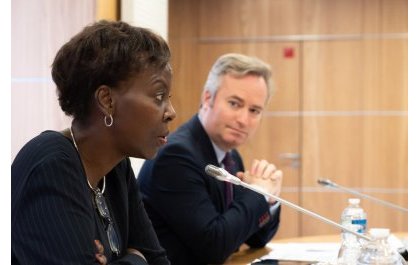